Lake Superior at the mouth of the Montreal River.

This kite aerial photography (KAP) session took place about 3 days into my journey west which had been planned as a 30-day photographic trip to the west coast and return to Ottawa via the USA. However, a day or two after this I suffered intense back pain which I sustained while my friend, Ted Welch, drove the rest of the way to Victoria, B.C. Subsequently I had two long stays in hospital, 9 days in Victoria and 8 days in Ottawa following surgery. Needless to say, this was not how my summer had been planned.

Here we were at the Montreal River, near the community of Montreal River Harbour. The river empties into Lake Superior at the Twilight Resort. I thank Dan Miles of Twilight Resort for allowing us access to his property in the off-season in order to take these pictures. Unfortunately the wind dropped not long after I put the kite in the air. Only a few nice shots were captured during this time. I would have liked to get more altitude to get a better perspective of the river entering the lake and to get a shot with the whole resort in a single frame.
Here is the Facebook page of Twilight Resort: https://www.facebook.com/TwilightResort

I have had a 16 month hiatus from kite aerial photography …. I’m happy to say “I’m Back”.

This first session of 2015 was actually a commission job and I’m not showing the client’s photos. The images I’ve put on my website are byproducts of the session resulting from the great location. Had there been time after the ‘job’ I would have done more shots of the bridge, the park and the Ottawa skyline. However, strong gusts kicked up that prevented me from doing more. Additional images from this session can be viewed on my website (link under the photograph).

The image here shows the Prince of Wales Railroad Bridge. There are two sections to the bridge. This is the section which goes from Lemieux Island at the bottom to the Quebec shore (Gatineau) to the left and top. The rail line runs approximately 200 metres on the eastern edge of the island and then there is a second section of bridge connecting the island to the Ontario shore (Ottawa). The bridge has been out of use for some time but is now under consideration as part of the developing LRT (Light Rail Transit) for the city.

I have recently added this image to my storefront at Fine Art America.  It is for sale as an art print, canvas print, poster or greeting card. Sales are direct through Fine Art America who handle all arrangements, manufacture and shipping.

Click on the image to go to the same image at Fine Art America.

Downtown Ottawa from Victoria Island. Parliament buildings on the left and the Supreme Court on the right with the semi-frozen Ottawa River below.

Back to the land of snow and ice after a wonderful month of February in Australia. Recently I have made a couple of attempts to KAP the Wakefield bridge without any success so a couple of weeks have elapsed without succeeding with any kite aerial photography. Finally a nice day arrived to do some work with the Parliament buildings and the still frozen landscape. Here are some of the shots from this session.

I was looking for a park off the highway to eat a sandwich before continuing the drive home. I pulled off at Cabano, Québec, a town I had not previously visited. Although much of the signage reads Cabano, I have since discovered that the two villages of Cabano and Notre-Dame-du-Lac were merged in 2010 to become Témiscouata-sur-le-Lac. I found a very large park on the lakefront, Parc Clair Soleil, and had my lunch. At ground-level there were traces of snow and much brown dead-looking grass which might be less than inspiring to a snap-shooter on vacation but beyond that I saw a beautiful half-frozen lake, an intriguing small mountain on the other side of the lake, a lighthouse, a wonderful streaky sky, an interesting layout of storefronts and a park with plenty of room for kite-flyers to go wild. So, out came the gear and here are some of the better images from the session.

Aerial photograph of the city skylines of Ottawa on the right and Gatineau on the left. The frozen Ottawa River passes between.

This Kite Aerial Photography session took place on the Ottawa River shoreline where the Prince of Wales Railway Bridge lands on the Quebec side in the city of Gatineau. Most of the images point towards the Ontario side as they are pictures of the bridge, Lemieux Island and the city of Ottawa skyline. Chaudiere falls is in the middle of the river in the foreground of the aerial skyline photographs of Ottawa/Gatineau.

The Prince of Wales Bridge is not currently in use, and you can see that by the snow on the tracks where only people and dogs have traversed. The bridge is a part of the focus of ongoing discussions regarding rapid transit in the Ottawa/Gatineau region. It has been proposed to operate light rail commuter transit over the bridge.

Actually, one is not supposed to trespass on the bridge as it can be dangerous and accessibility on the Ontario side is difficult due to construction. Despite this, the bridge is often used in model shoots by professional, and not so professional, photographers. Actually, in the picture below, I’m already beyond the sign but hardly in a dangerous location.

Go here for more images from this session.

Prince of Wales Railway Bridge meets the Quebec shoreline of the Ottawa river. That’s me down there, the kite aerial photographer, with the kite line washed out in PhotoShop.

Prince of Wales Bridge runs from the Quebec side in Gatineau, where I am currently flying my kite, across Lemieux Island where there is a filtration plant, and then the bridge continues to the Ontario side in Ottawa. 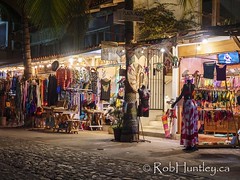 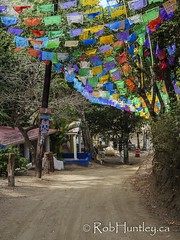 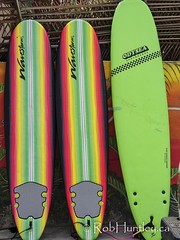 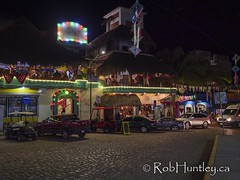 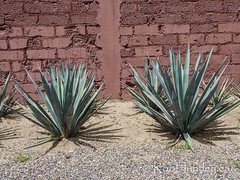